In the video David Toledo and his 7-year old daughter Kiki match dance moves in an attempt to one-up each other and win the dance challenge.

The video is a great example of the love shared between a father and daughter and reminds us all to make time to do fun things with our kids, and as David’s Facebook post says, “Make memories with your children.”

David Toledo is from Seattle, Washington and was raised in North Seattle.  Due to Seattle Public School’s busing program of the 1980’s David attended Garfield High School in Seattle’s Central District his freshman-Junior year ~ to which David says was a blessing as it allowed him to grow artistically in such a arts-rich environment which was also home to Quincy Jones, Jimi Hendrix, and most recently Macklemore.

“I loved my time at Garfield.  I made some life-long friends and really grew as a person.  It was while at Garfield that I was introduced to the hip hop culture and most notably for me, the hip hop style of letter and character design.  I returned to the north end my senior year and graduated from Ingraham High School, but I am so thankful that I was able to attend Garfield for those crucial years.” David said.

The style of lettering and character design has played a large part in David’s adult life as he has become well known for his cartoon animation and comic book design classes.  A published artist, writer, and director, David splits his time between his professional career and volunteer services working with low income and at-risk youth through the Unified Outreach youth arts program. (www.UnifiedOutreach.com)

“My mother was a great example of a giving heart.  She actually started a food bank and emergency services hub from our home in North Seattle back in the early 1980’s.  She would prepare and deliver care packages, volunteer at soup kitchens, take in families that needed temporary housing…. She poured her heart into our neighborhood.  She showed us that love is an action word.” 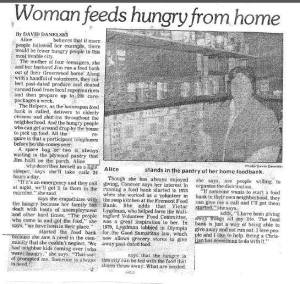 “I try to live up to that.  God has blessed me with some artistic ability, and I try to use that to the best of my ability to inspire kids.  I came from a single mother household so I know some of the struggles they are going through.  Drawing, painting, music, acting… all of these things help to break down barriers and build self esteem that is so crucial in healthy emotional development.”

David says that he and his daughter have been dancing together (and against each other) for years and that it was actually his daughter’s idea to post the video which is actually a few years old.  When they came across it on an old computer disc they thought it was so funny that they just had to post it.   They never expected that the video would go viral.

“We’re glad that it has touched so many people.  The feedback has been so positive and it’s wonderful to see how it has inspired others to get a little silly with their kids.  The window for making lasting memories is so short, we have to cherish that time with our children.” 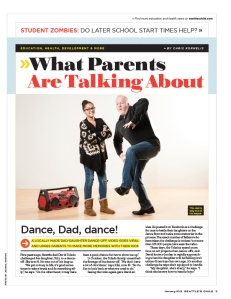