June 11th, 2015 Writer/Director Maximilian Meador-Stockstill brings the real-life police/teen interactions of Seattle residents to the stage in an entertaining combination of drama, suspense, humor, and dance.

Sammy Tekle shines as the main character who (although recently deceased) walks the audience through a series of emotional flashbacks which start with him hanging with his crew (which include some spectacular dance performances) and end with him being shot during a routine traffic stop.

Dan Haile has the audience in tears as he delivers the eulogy for his fallen friend; and Vicious Puppy (aka Dog Pound) members (Jonathan Higuchi, Binh Nguyen, Robert Eyerman, Justin Law, John Pham, Quan Nguyen) deliver a passionate back-and-forth debate regarding the role of police and how we as citizens should interact with them.

Black & Blue received a standing ovation and extremely positive feedback during the question & answer period following the performance. Writer/Director Maximilian Meador-Stockstill stated he would be interested in expanding the tour and all actors showed an interest in an extended run.

The Vicious Puppies (aka Dog Pound) continue their meteoric rise to celebrity status by expanding their already impressive resume which includes performances at the Paramount’s “Dance This!” and main stage performances at this Summer’s “Sasquatch” tour. 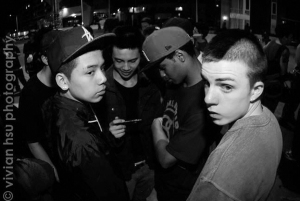