Diaries of a M.A.D. is an interdisciplinary installation, uniquely bridging music, cinema, and performing arts in an intimate exploration of struggle and perseverance. The album is laden with crisp snares, warm kicks, and dusty samples produced by members of Dev From Above, Third Eye Bling and Khazm and his beat crew, The Konstructicons. The soundscapes of this autobiographical essay paint a dark lacquer of social commentary.

The stage show produced by Olisa “Spyc-e” Enrico, is an artistic interpretation of how a biracial, disabled youth was able to overcome challenges in Seattle’s South end. An amalgam of Hip Hop, Japanese culture and disability awareness; the conceptual musical performances, blended with visual projections, dance and theatrical segments, push the boundaries of what is and what can be.

In 2003, King Khazm, along with his rap group- Cyphalliance, emerged onto the Northwest Hip Hop scene with exceptional response with debut album “Industreets.” A barrage of technological mishaps and life prevented the long awaited follow up album from seeing the light of day- until now.

One decade later, Living as a M.A.D. has been miraculously recovered, and after several months of extensive reconstruction, the album will finally be released. This sonically diverse project, recorded at Seattle’s renown Pharmacy, includes production by Jake One, Vitamin D, DJ Tre, Kitone, and others. The soundscape ranges from socially conscious lyrics to smooth melodic vocals.

Diaries of a M.A.D. and Living as a M.A.D. both release on Fresh Chopped Beats / MADK Productions and will be available at iTunes, Amazon.com and finer Hip Hop specialty stores.

For 20 years Georgio Brown’s “Coolout Network” has introduced us to hot new talent; and since 1991 the show has kept fresh and evolving. From the early days of “Club Coolout” to its move to webisode format in 2007, Georgio has proven to be a man on with his finger on the pulse of the City.

For those of us around in the early 90’s, we remember the hot local video & dance show shot on location at clubs like the Rock Candy and DV8, and community center’s such as the Langston Hughes Cultural Arts Center.  “Club Coolout” featured kids dancing in a “Soul Train” setting interspersed with videos from local artists.  The weekly broadcast allowed viewers to get to know local musicians such as Kid Sensation, Specs, Incredicrew, D’Armageddon, Edawg, and a number of others; as well as hip hop dancers such as Sam Dumas and PPIA.

Georgio first caught the video production bug when he was in high school (back in 1980’s New York), where he would film local rappers and B-Boys. This took off for him as he saw how much people enjoyed and were inspired by the shorts he created.  In 1991 Georgio found his way to Seattle, Washington and the rest is history.

In April of that year Georgio began producing a series of videos focusing on Seattle’s Hip Hop scene. These shorts turned into the “Coolout Network” which began airing on Seattle Public Access television stations.  The program has not only been a doorway to success for dancers and musicians, but also for those artist’s trying to break into radio and television broadcasting such as B-Mello and Sacha Starr.

Georgio has worked with Non-Profit performance arts programs and arts education programs and is often used for community awareness.  In the summer of 2004, Georgio Brown and Coolout Network were honored by the City of Seattle, receiving the Mayor’s Award for Excellence in Hip Hop for his dedication to create a positive contribution to the community.

In 2009 Georgio won local film-maker of the year at the Langston Hughes African American Film Festival with a short he shot and produced about the 206 Zulu Nation.  Georgio credits this film with lighting a fire in him to tell more stories about NW hip hop. And now that Georgio has announced his 5 year hiatus from Coolout, he plans on immediately jumping into his next project; a collaboration between himself and Scott Macklin, along with NW hip hop historian Mike Clark with will culminate in a full length feature documentary about the Evolution of Hip Hop in the Northwest.

“There are a lot of talented people in the Northwest that need and deserve attention and Coolout is the platform that can help them get the exposure and inspiration they need” – Georgio Brown. 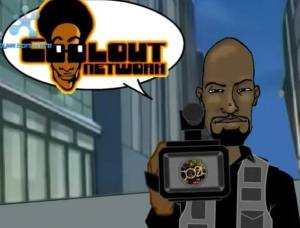